This trial was planted in the summer of 2014, SE of Arcadia along Highway 31 just inside Charlotte County.  The primary objective is to evaluate Vernia, Valquarius and Valencia sweet oranges and Ray Ruby grapefruit combined with rootstocks of the California C-Series [C-22:Bitters, C-54:Carpenter and C-57:Furr plus C-146]; three hybrids, ES-1, ES-2 and ES-4 from the Forner program (Spain) and Willits citrange rootstocks.  The scion-rootstock combinations are replicated 2-4x in plots of about 16 or more trees of each combination.  This trial is one of a series of trials intended to compare the same scions and rootstocks at several locations.  This trial differs from the others in that it involves fewer rootstocks and larger plot sizes. 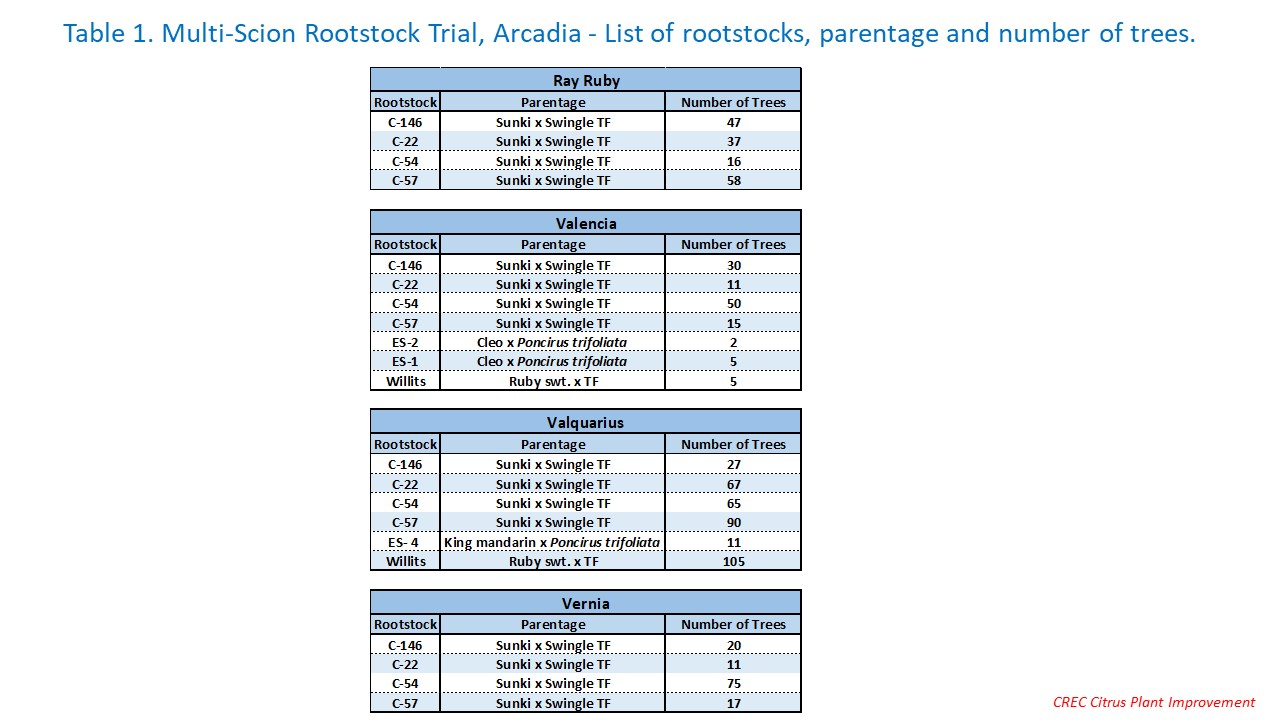 Like several other trials planted around the same time, this trial, planted in May-July 2014, comprised several scions on primarily the C-series [Sunki mandarin x Swingle trifoliate orange] selections from California along with Willits citrange and a few selections from Spain.  In many instances, the differences among the scions [Vernia, Valquarius and Valencia sweet orange and Ray Ruby grapefruit] combined across rootstocks were of a similar magnitude as those among rootstocks combined across scions.  In other words, the performance of a given rootstock is dependent on the scion.

HLB. The HLB ratings [mild decline or healthy] were similar among and within sweet orange selections; they tended to be lower[more symptoms] for Ray Ruby grapefruit.

Yield. Among the best-yielding trees were those of Valquarius on the C-series.

Juice quality.  There are not enough data so far on which to base an evaluation.  Much of the fruit sampling was done in January, a time of the year well prior to normal harvesting Valencia.  However, the data available support further investigation of Willits citrange.

Rootstocks. As a preliminary observation and as noted in other trials with the same set of rootstocks, the C-series generally perform well along with some of the Spanish ES series, thus, encouraging further evaluation.