In response to the interest of the owner-cooperator, a project was planned involving a series of scion-rootstock combinations planted at higher density [see Table 1]. The site was prepared with standard 2-row beds with compost added to each row prior to planting. The main body of the project consisted of Hamlin or Valencia trees planted on commercial rootstocks in a standard 2-row bed or trees on size-controlling rootstocks planted in 3 rows on the standard bed. Of the 50 rows, 21 were planted with Hamlin and 20 with Valencia. Of the remaining 3 beds, one each was planted with 3 rows of Valquarius, Vernia or Folha Murcha [a late-season selection from Brazil].

Microsprinkler irrigation was installed on the 2-row beds; on the 3-row beds, microsprinklers and drip were used on the outside rows, but only drip on the middle row because of water volume limitations.

The trees in the 8 x 15 ft. rows grew well enough that topping and some hedging was commenced when they were about 2-3 years old. 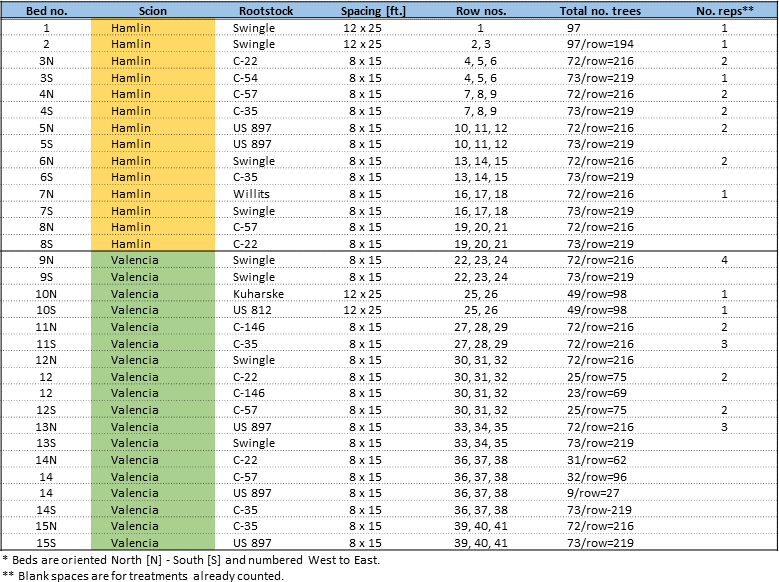 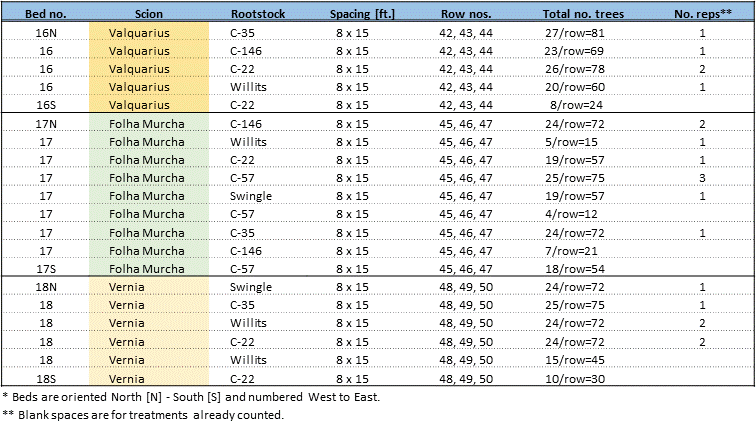 Caveat regarding data quality: Virtually all the Hamlin and Valencia trees were planted between July and September 2012; thus, the yield data are completely valid for tree age and are comparable among scion-rootstock combinations. However, because of plant production problems, rootstock substitutions were made among the Valquarius, Folha Murcha and Vernia trees, and tree planting occurred over a longer time period than with the other trees. As a result, the yield data for those three scions are representative, but not as comparable to the Hamlin or Valencia data or to each other. Further, the onset of cropping was delayed among the Valquarius and Folha Murcha trees relative to the Vernia trees for reasons not obvious.
Trial status: ACTIVE
Hurricane Irma [Sep 2017] caused considerable damage and flooding particularly of the south half of the trial. Some data collection continues using the trees of the north half.

A consensus overview of the project outcomes developed from discussions between the cooperator and the scientists as of the 2019-20 season.

Tree growth and development:
The Hamlin and Valencia trees were planted first and have, for years, been at containment size. Thus, their performance in recent years reflects yield as essentially “mature” trees.
Tree size:
Among those at 8 x 15 ft., tree size ranges from the taller ones being on C-57 and C-54 to intermediate ones on Swingle and C-35 to the shortest trees being on C-22 and C-146. The most compact [shortest] trees are those on Willits citrange.
Tree spacing:
10-12 x 20 or 22 ft. would be a more appropriate spacing when using C-54 or C-57 in the flatwoods. Otherwise, 8 x 15 ft. is suitable so far for trees on the remaining rootstocks.
HLB:
Visible symptoms indicate the trial is mostly infected; however, the trees on all rootstocks appear to be tolerating the disease except less so among those on Swingle, Kuharske and US 812.
Fruit drop
has clearly been heavier among the Hamlin versus Valencia trees regardless of rootstock which is consistent with commercial observations.
Practical application: