The primary objective in this project was to demonstrate the purported benefits of size-controlled trees planted at spacings appropriate to expected tree vigor. To that end, Hamlin or Valencia trees on various rootstocks were planted in whole beds at moderate to close spacing. The treatments [scion-rootstock-spacing combinations] were planted in single multi-row beds with spacing ranging from 12 x 20 ft. to 7 x 12 ft. or 181 to 518 trees/acre. Tree count was between 144 and 332 trees/bed. Some treatment combinations were replicated.

Part of the original plan was to test windbreaks. Thus, each scion block of 20-acres was subdivided into 4 sections and surrounded by a two-layer windbreak consisting of a fast-growing tree [Corymbia torelliana] and a short, yellow-flowering shrub [sterile, Gold lantana].

SITE DEVELOPMENT:  The trials were established on land previously planted to citrus growing on 60-ft beds. Two adjacent 20-acre blocks were selected for planting with Hamlin or Valencia. The broad beds were retained, but renovated to their original condition. A drip irrigation/fertigation system was designed and installed by Arapaho Citrus Management. Prior to or after planting, a layer of chicken manure-based organic material was added to each row except the western-most 5 or 6 beds in each block.

PLANTING: The citrus trees were produced in a commercial nursery. The beds in each block were numbered consecutively from east to west and 3 or 4 rows/bed were staked off depending on the rootstock-spacing plan [Fig. 2]. The planting plan was developed in conjunction with the soil map [Fig. 1] to minimize soil series as a factor affecting trial outcomes. Planting commenced in November 2009 and continued until September 2010. The first trees were planted in bed 1 and continued to the west [Table 2]. About 2/3 of the trees were planted in 2009.

The windbreaks were planted before the citrus. Management proved to be a bit problematic. The C. torelliana trees grew off satisfactorily, but the lantana plants did not compete well with weeds.  They were difficult to maintain and, thus, did not provide the yellow color intended to distract psyllids.

DATA:  Yield measurements, by bed, began when the trees were about 3 years old and continued for 4 consecutive seasons.  Tree canopy size was measured in the first year when yield data were obtained. No data were taken from the research beds. No juice quality data were collected from each bed; however, to provide a overview of the general quality, data are presented from the official test house facility at the processing plant where the trailer loads of fruit were delivered from the trials.

HLB and COLD WEATHER:  Visible symptoms of HLB began to appear among the trees after several years, but those symptoms were not widespread or more apparent among the trees of one treatment versus any other scion-spacing-rootstock combination.

A freeze occurred soon after planting in 2009.  Many of the newly planted trees were injured.  Badly damaged trees were replaced where possible.

The trial was terminated and removed in 2016. 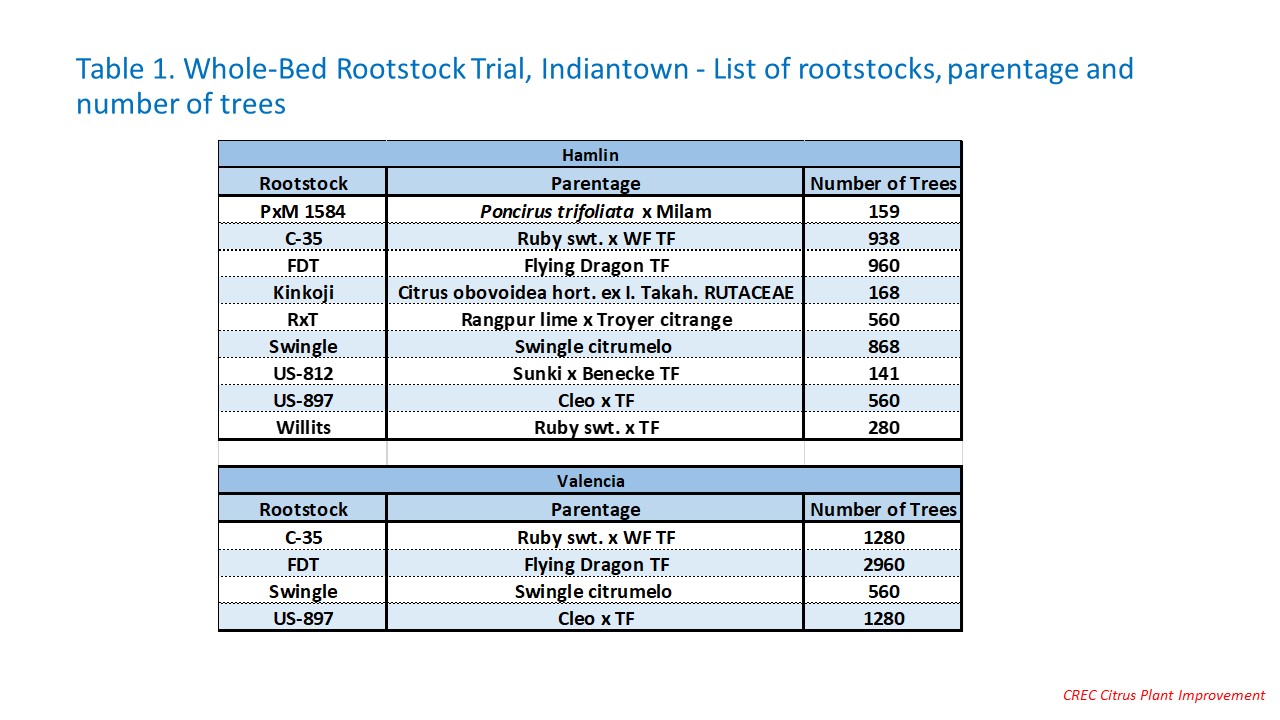 Hamlin. The trees were only 6-7 years old when the trial was terminated and removed.  In that span of time, 4 years of yield data provided evidence supporting the "Sweet Spot" concept , i.e.,  proper selection of tree spacing is dictated by the vigor of a scion-rootstock combination, site conditions and cultural practices.  Rootstock examples illustrating this concept are:

Valencia. The cumulative yields among many of the Valencia trees were higher than those for the same combination with Hamlin which is unusual because of the generally smaller, less vigorous growth habit of Valencia.  Rootstock examples illustrating the Sweet Spot concept are: