In this trial with two selections of Vernia midseason orange scion, the primary purpose was to evaluate a series of best-performing rootstocks created in Argentina by Jose Luis Foguet and selected from among a series of trials conducted in Argentina [Table 1].

Limited data were obtained from this trial after planting in 2003 with Vernia scion on rootstocks from Argentina and 3 Florida commercial standards in a design with 6 reps of 2-tree plots.

Tree ht.  At age 12 years, the trees on the more vigorous rootstocks like rough lemon and Cleopatra mandarin hybrids were mostly 10 ft. tall while the smaller trees were <8 ft. tall like those of Willits citrange.

HLB. Visible leaf symptoms were present among all trees with little apparent effect on tree performance.

Yield. Yield was measured in only three seasons.  When the 3-year cumulative yield was compared with tree height [Fig. 7, 8], the best performers were those on PTM 1584 and Sweet RL, i.e., they had relatively high yields despite tree size.  The correlation of those two variables was 0.53 indicating that a relationship existed, but considerable variability was not accounted for by those two factors.

Juice quality.  Fruit samples were collected in the 2018/19 season in February.   Brix values ranged from 10-13 [Fig. 9] which were high values in comparison to other trials conducted during the HLB era.

PS/acre.  When combining juice quality with yield, the top performing rootstocks in the 2018/19  season were PTM 1584, Kinkoji and the Argentine selection, 79 CL.

Rootstocks.  Insufficient data are available to support any firm conclusions after 18 years, but the limited results suggest that no tested rootstocks should be considered poor performers.  Some evidence is presented indicating that the smaller tree size of those on Willits citrange merit further evaluation of that rootstock as well as PTM 1584 which has done well in other trials. It is also noteworthy that selections of the old Florida rootstock, rough lemon, performed well. 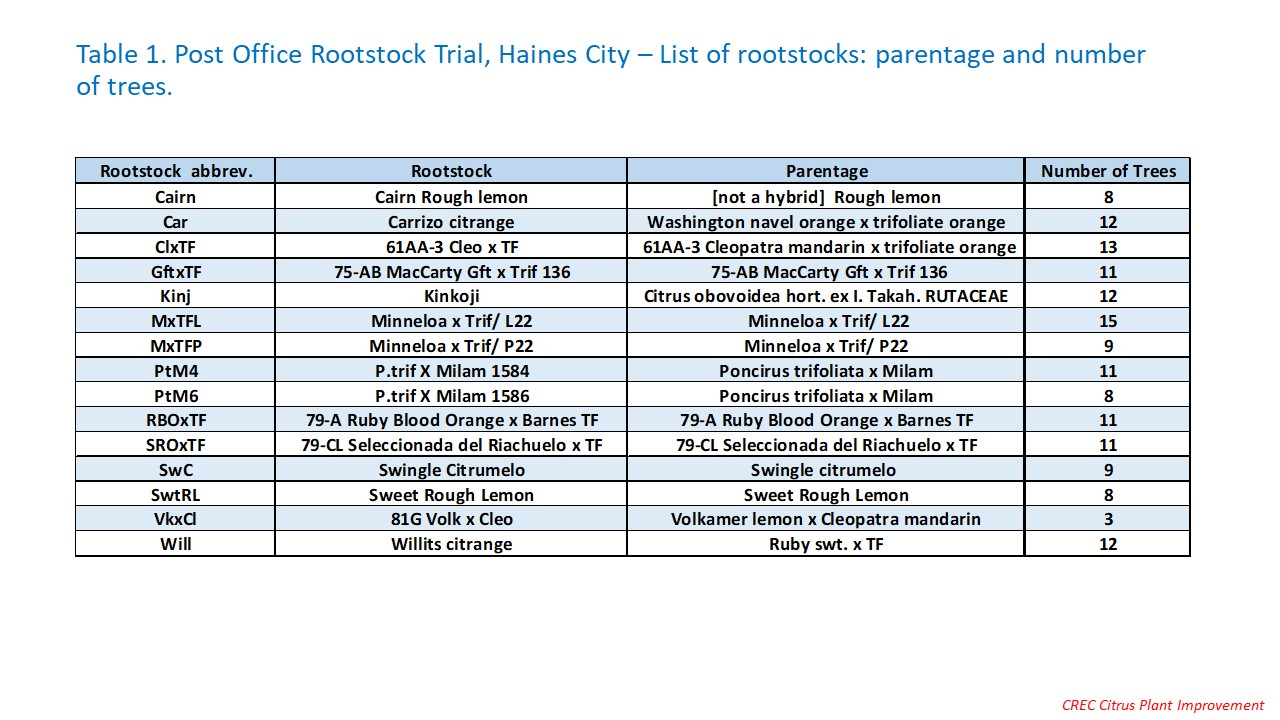