Two standard Valencia clones, 55-4 and 1-14-19, were combined with the California C-series [C-22, Bitters, C-54 Carpenter, C-57 Furr and C-146] rootstocks along with Willits citrange [size-controlling] and the Spanish series [ES] in this trial.  Planting took place in May 2014 in a cooperator site located just west of downtown Lake Placid.  The objectives were to compare two scion clones of the relatively tolerant Valencia sweet orange primarily for HLB response, and to evaluate the horticultural traits of these rootstocks which were all included in a series of trials placed throughout Florida; thus, this trial can be viewed as one of a network of several designed to expand the base of evaluation. 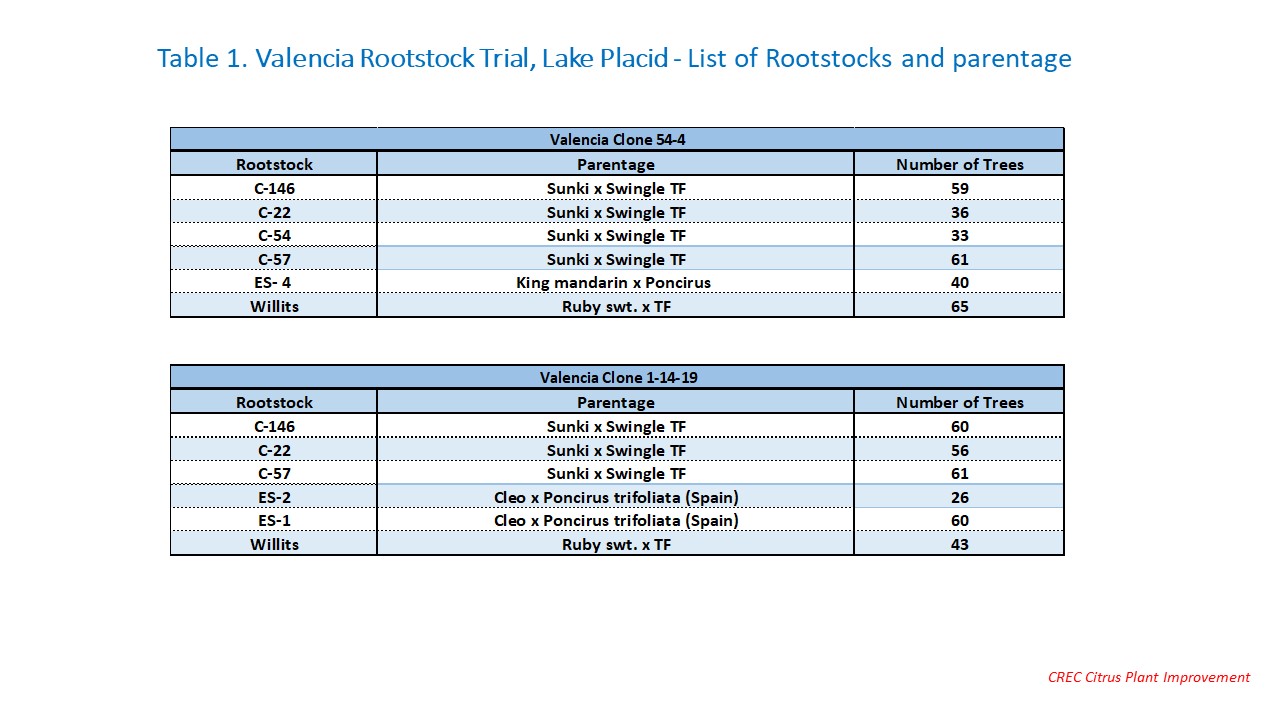 This trial, planted in 2014 at 7.5 x 22 ft, to evaluate Valencia as a juice fruit is an example of a small trial in which the rootstocks being evaluated were similar enough in parentage that there were few differences in their performance.  In this case, 50% or more of the rootstocks tested were hybrids of Sunki mandarin x Swingle trifoliate orange. The trees of two Valencia orange clones on 8 rootstocks exhibited only small differences among most measurements as follows:

HLB. While leaf symptoms indicated the presence of HLB, trial trees were largely rated healthy; however,  it was clear the fruit was affected.

Juice quality.   Samples were collected in several seasons, but often in January and February before the normal start of the Valencia harvest.  Thus, the data were not strongly representative of the variety or revealing of rootstock differences.  Some data suggest that the Brix and juice color values were higher for the 1-14-19 clone versus 55-4 [Figs. 2, 5].

PS/box.  These values were quite low [4-5] for Valencia most likely because of sampling early in the season before marketable maturity was achieved, and HLB.

Rootstocks. A close inspection of all the data indicates that a statistical analysis would not likely lead to discovery of any meaningful differences among rootstocks.  Thus, possible conclusions as of April 2021 are that: [1] all the rootstocks do not merit further evaluation; and/or [2] given that the objective of this trial was to be one among several to test and compare these rootstocks in various locations, virtually all of them performed at an acceptable level by comparison among sites and with commercial rootstocks included in other trials.