My research program in citrus variety improvement addresses all major citrus production problems in Florida, and also strives to develop new cultivars that will provide growers with new marketing opportunities. Using a team-oriented approach, my program is integrated with other members of the IFAS/CREC cultivar improvement team (F. G. Gmitter, W. S. Castle, and G. A. Moore) as well as entomologists, pathologists, and physiologists. I have been a consistently productive full professor, as evidenced by a ‘Superior’ faculty evaluation every full year that I have been employed by UF. Our citrus somatic hybridization program is the most successful in the world, resulting in somatic hybrid plants from more than 150 parental combinations. Most of these are now in field tests (in replicated commercial blocks) to determine their potential in scion and rootstock improvement. After collecting a few more years of yield and fruit quality data, we expect to release new somatic hybrid rootstocks to the industry that should have improved disease resistance (including blight, CTV, Phytophthora, and nematodes), better adaptation to poor soils, improved tree size control (which should facilitate mechanical harvesting and cold protection), improved nursery characteristics, and higher and more consistent productivity. Feedback from field trials is guiding current somatic hybridization research, and several mandarin + pummelo hybrids with potential to replace sour orange rootstock have been produced. Our successes in somatic hybridization have allowed us to initiate rootstock breeding and selection at the tetraploid level (a completely unique approach), resulting in the selection of more than 150 superior individual hybrids called “tetrazygs” to date (collaboration with J. H. Graham). Progress has also been made towards the development of rootstocks with improved tolerance of Diaprepes root weevil (collaboration with C.W. McCoy) or salinity (collaboration with J. P. Syvertsen). Somatic hybridization has been used to broaden the germplasm base available for rootstock improvement by producing hybrids with sexually incompatible or difficult to hybridize citrus relatives that possess valuable attributes. Numerous tetraploid somatic hybrids that combine elite diploid scion material have been produced and several flowering somatic hybrids are being used as pollen parents in our triploid breeding program (under the direction of F. G. Gmitter). Some of these somatic hybrids are producing quality fruit at the tetraploid level and a few may have cultivar potential on their own. We have built the largest collection of quality monoembryonic diploid females and quality tetraploid pollen parents in the world. More than 7000 triploid hybrids have been recovered from interploid crosses followed by embryo rescue, with a good percentage of these being fathered by somatic hybrids (in collaboration with F.G. Gmitter). This program will generate the seedless zipper-skin tangerines that the Florida citrus industry desperately needs to compete both nationally and internationally. Another approach to seedlessness is the transfer of CMS (cytoplasmic male sterility) from Satsuma to other elite but seedy Florida scions via cybridization, and so far we have achieved this with 4 cultivars (3 tangerines and one pummelo). This approach has the potential to make existing popular cultivars seedless, without otherwise altering cultivar integrity. Progress has also been made in the development of improved acid fruits (lemons and limes) and ornamental citrus. Triploid lime hybrids containing ‘Lakeland limequat’ germplasm that are resistant to citrus canker have been identified by screening using a stomatal inoculation method. Because sweet oranges and grapefruit are not amenable to conventional breeding, my program has focused on the generation of somaclonal variation to produce new cultivars. We have the largest field study in the world to evaluate somaclonal variation in woody fruit trees. Expected releases from this program in the near future include: Valencia sweet orange selections for processing with earlier or later maturity, or improved color and higher soluble solids (which will facilitate the shift from a concentrate market to an NFC-not from concentrate market in Florida); improved Valencia clones for fresh market with seedlessness, reduced rag, and altered maturity dates; and Hamlin sweet orange selections with earlier maturity, or improved color and higher soluble solids. One high-quality Valencia somaclone matures in January, two months ahead of standard Valencia. The molecular component of my research program has also made significant progress. We have developed an alternative citrus transformation method that utilizes GFP for selection and plant recovery via somatic embryogenesis - resulting in transgenic plants containing no bacterial resistance genes (more consumer friendly). In collaboration with the W. O. Dawson group (Plant Pathology), CTV-derived sequences are being screened for their ability to block CTV-replication, using an in-vitro protoplast assay. One transgenic sweet orange callus line containing the 392 CTV sequence has been identified that does not support CTV replication. Efforts to transfer this gene, other disease resistance genes (including potential canker resistance genes), and fruit quality genes (in collaboration with J. K. Burns) to commercial cultivars are underway, and transgenic plants are being produced. Recently, we regenerated transgenic Hamlin sweet orange plants that contain the Xa21 Xanthonomas resistance gene from rice in efforts to develop canker-resistant citrus (using the protoplast/GFP transformation system). Overall, my research program should impact many aspects of Florida citriculture in the near future. 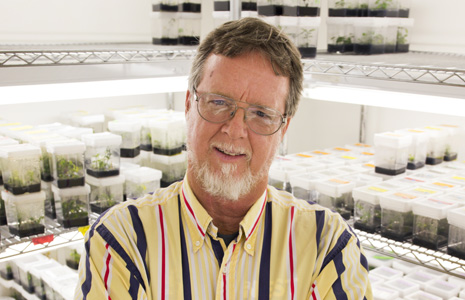